Timo Minssen, head of the University of Copenhagen’s Center for Advanced Studies in Biomedical Innovation , speaks on the ethics of gene editing at the New York Genome Center. (Photo by Larry Luxner)

Developing gene therapies for rare diseases is one thing. Creating gene-edited “designer babies” is quite another.

Minssen directs the Center for Advanced Studies in Biomedical Innovation Law at Denmark’s University of Copenhagen. In his June 18 talk, titled “Regulating the promises and perils of gene editing: What are our options?”,  Minssen discussed the difference between somatic cell therapy, which aims to cure disease in one specific patient, and the much more controversial germline therapy, which makes heritable genetic changes to embryos or eggs — and therefore to any offspring of that patient. 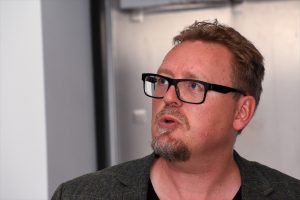 Timo Minssen, head of the University of Copenhagen’s Center for Advanced Studies in Biomedical Innovation, speaks on the ethics of gene editing at the New York Genome Center. (Photo by Larry Luxner)

“This distinction is really important, since they involve completely different ethical considerations,” said Minssen, whose area of expertise is patent law.

A major breakthrough took place in 2015, when a year-old baby girl with aggressive leukemia, Layla Richards, became the first in the world to receive “designer immune cells” that had been genetically engineered to destroy her cancer.

Waseem Qasim, a consultant immunologist at London’s Great Ormond Street Hospital, which gave Layla the 1ml liquid infusion of immune cells, told The Guardian at the time: “This is a landmark in the use of new gene engineering technology and the effects for this child have been staggering.”

Yet CRISPR, he warned, also can be used for dubious purposes.

“Changes to germline cells could be passed on to future generations,” he said. “This brings up a number of ethical challenges, for instance, whether it would be ethical to enhance height. Under the German constitution, human dignity must not be violated, based on the horrible things Germany did [a reference to Nazi medical experiments on Jewish twins] during World War II.”

In November 2018, the MIT Technology Review revealed the existence of a secret Chinese program led by U.S.-educated researcher He Jiankui to edit genes in a human embryo. Soon, the story of the birth of gene-edited twin girls Lulu and Nana was making headlines around the world. He was put under house arrest, and China’s National Health Commission quickly ordered an investigation into the renegade scientist’s work.

He claimed his goal in modifying a gene known as CCR5 had been to protect the girls from AIDS — their father is HIV-positive — but a new report shows this variation could make the twins more vulnerable to the West Nile and influenza viruses, leading to their early deaths.

“Did He really address an unmet medical need?” Minssen asked. “He said he would prevent the risk of AIDS, but there are medications to treat AIDS. He kept a lot of his research secret for a long time, but also authorized a shady PR campaign. All this raises a myriad of ethical issues.”

Minssen noted the “patchwork” of various laws around the world that attempt to address such problems.

“There are enormous disparities even within Europe. Some countries permit genetic editing for therapeutic purposes, some don’t,” he said.

For example, Italy and Sweden allow gene editing for therapeutic reasons, while Germany has a very restrictive approach to gene editing and is banning it for most purposes.

“We also don’t want the law to be too rigid, or we’ll lose the enormous potential this technology could mean for many patients,” he warned. “What’s clear is that human genetic editing is particularly tricky. The Lisbon Treaty has specific provisions banning these practices on humans, but we really need international treaties here.”

Minssen said it is difficult to enforce such rules “in an amazingly complex patent and licensing environment” — particularly when it comes to CRISPR and other new technologies.

“We need to engage with regulators to reassess the ban on all germline modifications for clinical application in human reproduction,” he said, suggesting that specific genetic disorders should be analyzed on a case-by-case basis.

“We must oppose demands for any modifications of the legal framework until consensus has been reached,” he said. “We need to reassess the current situation, and if necessary, we need to change the law to allow some of these therapies. Considering the suffering we could relieve, it’s very important that we not become too restrictive.”